July 16, 2017
We took a walk this morning through Garden settlement which is a squatter camp near the center of Lusaka. When Zambia, formerly known as Northern Rhodesia, gained its independence from Great Britain, many colonial landowners left the country. Thinking there would be jobs in the cities, many Zambians moved to Lusaka and began squatting on land owned by the former colonists. And today these squatter camps are home to millions of Zambians. With very few paved roads, no sanitation services, no trash collection, and no zoning laws, these areas are crowded and dirty but bustling with life. People eke out livings by opening small shops, reselling food items, offering services such as "tyre repairs," small grocery stores, clothing shops, etc. Right next to the local clinic/hospital, we saw the local funeral shop. We stopped in at a pharmacy that was no bigger than 20 ft by 20 ft where the pharmacist had various antibiotics and antimalarials for sale without prescriptions. She said that her biggest sellers were cold medicines for children and antibiotic creams.
Despite the terrible poverty, we learn of progress since our visit here 10 years ago. Thirteen percent of the population is infected with HIV, but this number has decreased in the last decade. Now fewer than 5% of babies born to infected mothers are infected - 10 years ago around 40% of babies born to infected mother were infected. Many more people receive life-saving HIV treatment. Much of this progress is due to help from the US government, which, hopefully will continue. Efforts to control malaria are increasing; there are now several new programs to prevent gender-based violence and help victims of these crimes; work is being done to decrease child marriages, decrease early teen pregnancies, decrease STD's, and to educate teen girls about care during menstrual periods. Hopefully later in our trip we will learn about new efforts to treat and prevent malnutrition.
We spent more time at Living Hope School discussing problems due to inadequate resources: leaky roof, flimsy book cases, very little computer support and availability, school desks in need of repair, problems with the water storage system, and problems meeting new government school standards. Some are solvable by partnerships with NGO's; all of these need more financial resources. Accountability is an important part of all these projects: people want to know that donations, grants, and gifts are are used in the best possible ways.
Teachers in our group gave a day-long seminar on teaching methods for the teachers from the 2 schools our group is working with. They worked on team building, discussed problems and possible solutions, and shared success stories. Later in the afternoon a small group went back to Sekelela with blackboard paint and supplies to help school staff resurface their blackboards.

Popular posts from this blog 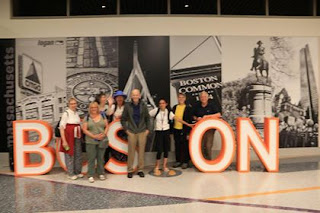 Leaving Boston on June 28 for the annual CWB trip to Lusaka, Zambia. Overnight in Dubai seeing the 163 story Burj Khalifa apartment tower and the Burj al Arab Jumeirah lit up at night. Then arriving in Lusaka on 6/30 to be met by our wonderful hosts.

June 30, 2017
We've arrived!  Exhausting long hours of flying, but the service was very nice on Emirates. Now we are confortably ensconced at the Kalyangile Guest House.  Great meal and comfortable accomodations.  Weather is just beautiful.  Tomorrow we will have a planning session for Days for Girls at Living Hope and an actual teaching session at Sekelela in the afternoon.
Read more